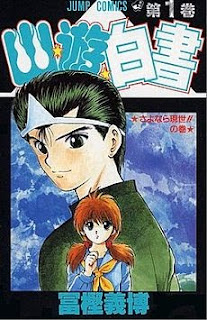 YuYu Hakusho Translates into "Ghost Files" or "Poltergiest Report". The story follows a 14 year old boy Yusuke Urameshi as he waits in limbo after a car accident which kills him. He is immediately visited by Botan, Guide to the Underworld. She tells him that his death was not planned by the powers that be and was also completely senseless. Urameshi died trying to save a child from being hit by a vehicle. It turns out the child would have been completely unharmed, had Urameshi left the situation to fate. Instead, the boy gets a bit scraped up and Urameshi is struck by the car. Botan explains however, that sometimes these things happen and in this case, no room has been made in either Heaven or Hell for the delinquent Urameshi. So he may choose to be brought back to life, should he pass a certain test.

All this is quite humorous. Award winning author Yoshihiro Togashi tells the story without taking things all too seriously and allows us to warm up Urameshi who everyone sees as a trouble maker. I like a good trouble maker. The issue is, Urameshi isn't much of one. He gets a bad rep for fighting at school and smoking. At the same time, he goes out of his way to help others but no one sees that side of him. The only friend he has is Keiko! She's horribly distraught by the boys death considering the last thing she said to him was a suggestion that he go die. Urameshi only has two days to make contact with her. He has to a) save his own body from the crematory and b) let Keiko know that he is alright and will come back to life. He makes contact via dreams and the body of another school mate who although un-liked and creepy, seems to have a sort of sixth sense. Again, all this is done in a most dis-serious light.

Completely ridiculous and the author isn't hiding this fact. Actually, it's all kind of adorable. Why the hell not? Since author Togashi was awarded with the esteemed Tezuka Award in his 20's. YuYu Hakusho itself, is one of Shonen Jump's best selling series of all time and later turned into an anime which of course, I won't bother watching. I just don't like to watch anime nearly as much as I enjoy reading manga and I'm more often than not, unhappy with the translation to screen. The original manga series ran from October 1992 to December 1994.
Posted by The Frog Queen at 2:17 PM