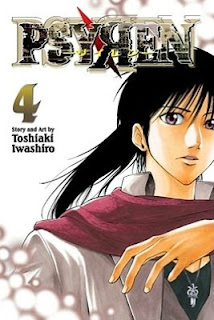 Finally we learn a little about Psyren and the future of Japan. It's all because of a meteorite...wait what? How is that possible? Apparently in 2009 a small meteorite crash landed in Tokyo and some secret operation nabbed it with a van. That's all we know. How did we get this information? The group was resent to Psyren and well there's this bomb shelter full of old newspapers from 2009. I kinda hate when stories include dates of a not-at-all distant future cause damn, 2009 was a while ago... it was back in 2009. It kinda ruins the story for me when you tell me the world is going to end - 4 years ago. I'm all for apocalypse and the destruction of our world but seriously, make it the distant future so I can cling to the dream as if it were real.

Wow that all came off a little morbid. I kid really. I don't actually care if the world ends. Kidding! Anyway, this volume of Psyren introduced a whole slew of new characters. Psionic children! (Band name?) These kids were pretty much abandoned by their parents because of their crazy, uncontrollable, psionic powers. Eye roll. They all live in this mansion with a creepy-old midget lady who makes everyone call her Grandmother. She basically went all professor X and says she's attempting to train these children to use their psionic powers to help fight the future destruction of Japan.

I find it really interesting that this book only talks about the destruction of Japan. I really have no idea if the rest of the world is a Psyren wasteland in the future or if Japan is oddly the only place afflicted. It's almost as if the only dry land on planet Earth is Japan, according to this author. Still, I like to think in this case that Japan was the only country affected since the rest of the world pretty much doesn't exist in this book.

One final note, I still like the artwork but man, the scripting. I know it's a translation but Iwashiro just isn't funny. His jokes are terrible and I don't find the visual "comedy" (if you can call it that) appealing at all. After reading something like Yatsubo! which has amazing visual comedy with awesome facial expression on all the characters, stuff like Psyren can be pretty disappointing.
Posted by The Frog Queen at 10:53 AM