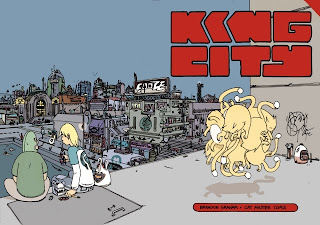 My favorite things about Brandon Graham's writing happens to be his are puns and abuse of common English sayings. For instance instead of "shitload" he'll say "shirtload" and in the case of King City, a grifter lock-picker named Joe has a cat with special powers and needs to duplicate keys (he sells them on the black market). Want to replicate that key? The cat swallows it and spits out two- "copy cat". Lots of wonderful uses of signs : "No trespassing! Violators will be violated!" Brilliant silliness. Golden dialogue, Joe is reading headline :

"Hold up..Unfairly hung she-male." "It is a shame. I saw a man unfortunate enough to be unfairly hung. No trial, just a noose over a tree. It's a horrible thing." "No, you're not paying attention, Look!" "Krushchev's Bones! That they could have thrown over a tree!"

It's funnier if you realize that the conversation takes place between a giant sasquache and a man with a genetically enhanced cat (at least I assume that's why he's so super). It's dialogue like this that makes me smile. In case you were going to get all bent out of shape about the use of she-male, allow me to explain that Brandon Graham hasn't got an issue with transgender/bi/gay anyone and that she-male is still a popularly used term by some people who don't wish to identify as trans. At any rate, let's move on.

So our Grifter Joe (well actually he's called a Cat Master) makes his living taking odd jobs with the help of his trusty side-kick Earthling J. J. Catingsworth the Third. He's the super cat however he does need a dose of cat-juice to perform any real exciting tricks like the cat-scope. Scripting gold: "Word to the wise..." "Don't know any." Sorry had to do that. 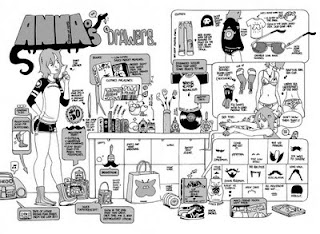 I absolutely love Graham's detailing of items. He does this in all of his books stories including Prophet which he writes but does not illustrate. Graham loves to make up all kinds of interesting gadgets. You remember my posts on Multiple Warheads? He had some great illustrated lists in there too. He uses them often and I think they are just fantastic.

As far as the setting? Well King City is on Earth but when?? Sometime in the future? Maybe? There are aliens! Basically, Multiple Warheads is very similar but it's unclear if King City is post-apocalypse. Apparently Korea is mostly xombies (zombies but spelt with an x). There is also an interesting drug called chalk that slowly turns users into the drug itself! Nice concept. It starts with your fingers turning to chalk and falling off until eventually you're all chalked up...gone.