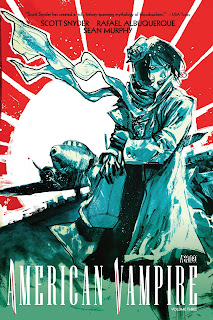 I really can’t say enough good things about American Vampire. I’m a huge fan now. Despite the fact that I’ve been reading it over warm beers… well the book is the reason my beer keeps going warm because I get so totally lost in the story that my beer just sits there untouched. I know, weird for me right? Since when have I ever let a beer get warm?

I think Pearl is the best female bad-ass of all time. Mr. Sweet? The All American bad-ass. I actually really want Pearl and him to get together but it doesn’t look like it’s in the cards. I think the two of them could actually take on North American easily. Pearl is currently with a human who she watches age, as she goes on unchanged physically. I actually don’t care for his character at all. He reminds me of whiney Riley in Buffy the Vampire Slayer. “oh poor me, I’m dating a strong female who doesn’t really need me and just loves me” WTF? Fuck Riley. God I disliked that character. I had so much animosity towards the character that I wanted to send hate mail to Marc Blucas.. okay I wouldn’t do that.. but I was an angry teenager and he pissed me off. Heh.

Sorry, I went off topic there. So Skinner Sweet does a sort of disappearing act and we learn that the only thing that can kill this new rare American Vampire is –GOLD! Wait a second, gold? Why gold? Well they don’t give us a reason. I guess it’s some parallel between the fact that the sun actually makes these new Vampires stronger, so gold gets to be their Kryptonite. Wait, that doesn’t make sense does it? Okay chuck that, I really have no idea why gold is so deadly to these guys. We also know that there is another blind monster breed of vampires that can seriously injure Skinner Sweet.

I’m not going to give away the plot of this volume, that is to say, I’m too lazy to summarize it. Our heroes/villains all travel overseas and there is a deadly new group of vampire hunters who have no idea what they are getting into. That’s all you get from me. Just read the damn book, the art work is to bite people over. I love it.
Posted by The Frog Queen at 5:30 AM