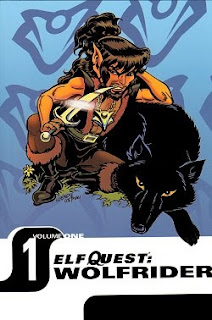 So... this was first published in '92. When I started reading it, I assume it was from the late 70's early 80's and that was because of how it was written. It's pretty awful. Obviously the writer/artists were not reading anything actually published in the 90's, well nothing good anyway. But then, I tried to learn more about the series and found out that in fact, the story started in '78. DC started publishing the series in chronological order and not order of publication. From my understanding, the writers skipped around in the timeline, releasing stories that happened 600 years prior to the main storyline and on into the future (back to the past, then to the future... wonder how the continuity held up?). So I have to assume that this particular story arc was published in '92 as listed in the volume.

It's sooo cheesy. There is no comic relief. The names of all the characters are completely trite and unoriginal : Mantricker, Bearclaw, Joyleaf ??? WTF. I'm bored already. These elves ride wolves, speak telepathically and live in a "holt". (Holt Renfrew? Holt 45? tehehe, I know it's not called that, Steve Holt?) A holt is a woodland area. Sigh. How original. Stupid wood elves. You know what class I never play in D&D or Elder Scrolls.. Wood Elf! Never play it, don't care.. bloody lame and short. I'm short in real life. Why would I wanna be short in an RPG? I am a Glitterboy in RIFTS for a reason. IT'S GIGANTIC and you don't even have to exit the suit to piss. It has built in plumbing. Wow the french sure know how to build mecha. (For anyone who is unfamiliar with RIFTS, please Google the word with Paladium. Marvel at the quadruple XL T-shirts.)

Alright, back to this awful, boring book. The first adventure these 3 foot elves experience happens to be bartering with some subterranean trolls. Another original name here- Maggoty. Just when I'm already bored, things get more boring when some humans enter the scene. Wouldn't you know it, apparently it's all out war because the elves and humans cannot understand each others language (oh and the humans think the elves are demons).  The elves refer to the humans as "round-ears" and the humans refer to the elves as ... wait for it... nope you got it wrong! They call them "pointy-ears"! Wait, that's what you guessed the humans would use as a derogatory term for the elves? So you're saying this book is totally unoriginal and boring?

You know, I really tried to get into this because it's a cult classic, but it looks like I started out with the wrong volume. Or maybe the whole series is just shite. At any rate, I think I'll just leave this one in the spank bank... back away slowly and pick up some quality stuff by Brandon Graham to make me happy. Matthew will be happy to know I'm into King City finally. Yeay for a break from school!!
Posted by The Frog Queen at 8:37 AM