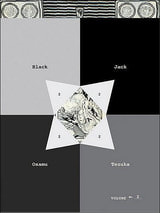 Hello all my lovely comic book fans! I am back and reading like crazy again with a stack of graphic novels and manga to get through! Finally finished school for a semester and then back at the learning table in September. For now it's comic book learning :)

I just finished reading Volume 2 of Black Jack. Somethings I wanted to point out about this volume and the first, I will address now. I realize I completely forgot to make mention of the disturbing chapter in Volume 1 where Tezuka has a black character that is drawn in a less than politically correct fashion. There are two reasons for this : one is that Japan was an isolated society for a really long time. There is a shocking amount of xenophobia to this day in Japan so image how it's been for the last 100 years. The second point is that Tezuka was largely influenced by American animation which as well all know,  was hugely ignorant and blatantly racist, especially in Osamu Tezuka's prime publishing years. The black character is essentially a black face with a clownish nose and mouth, completely pupil-less eyes downgrading the character from a person. That being said, I don't think Osamu Tezuka intentionally did this. I can't out-right be offended by his ignorance as the Americans were terrible at depicting African Americans in animation/drawings and did so BECAUSE they thought so little of the African populous. It's not as though Tezuka really stood much of a chance at being politically mid 20th Century Japan especially with his consumption of American entertainment.

So when reading Volume 2, I came across a chapter where there are Eskimo characters. Realizing of course that Inuit is the proper name but these books were translated using the word Eskimo. However, in the context, the main characters are disparaging the race/culture and shouting "Eskimo village" in a derogatory manner. This makes the use of the word appropriate. That being said the characters are drawn in a ridiculous manner that is ultimately ignorant and offensive. The characters have ridiculous large lips, almost no eyes to speak of and carry conversation in broken English. There is included a reference to a bizarre culinary experience that is inaccurate. "Raw Reindeer Fat! Fill your belly!" says the Inuit wife. She's drawn over-sized and burly.  The Inuit characters are depicted with their tongues consistently hanging out of their mouths which of course, insinuates a lack of intelligence and cultivation. I think savage was the word they were going for here. Clearly some serious ignorance and out-right insults. That being said, Japan wasn't exactly known for being understanding of foreign countries. They were isolationists and as previously mentioned, largely Xenophobic.

What's the point of me talking about this? Let's draw attention to the flaws of the past, acknowledge it and recognize that it is not acceptable. That being said, I still really like Osamu Tezuka and can over-look his ignorance in the face of a truly brilliant story teller.  This Volume was originally published in 1987 and Osamu was getting up there in years at this point with an already prolific career. Can't teach an old dog new tricks? Maybe, but I like to think if he were around and writing today, that he would see the error in his depiction of other cultures.
Posted by The Frog Queen at 12:31 PM