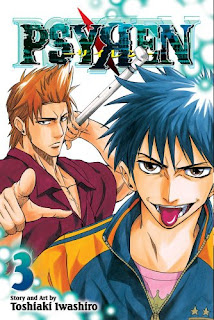 So it took me a few minutes to remember what happened in Volume 2, but I got this.. they are back in the Psyren wasteland which is the future of Japan! With mutants and monsters and aliens?? I'm not going to bother explaining the synopsis again. You will have to go back to the posts on Volume 1 & 2 for that.


Unfortunately, Psyren suffers from a common comic book writer pitfall “telling vs showing”. A tremendous amount of manga in the sci-fi/fantasy genre, take this route for lack (coughnoimaginationcough) of any other way  to explain the supernatural and extraordinary events/characters/etc. In the case of Psyren like so many other manga series, the characters have supernatural abilities and like so many other manga series the author has neglected to accurately show us how they work and has opted to have a character tediously explain it to the reader. By doing so, you are forcing the dialog in an unnatural direction and pushing the reader out of the current action and fantasy land (can you say "I love escapism"). It always makes me kind of pissed honestly, because I would rather figure things out with a series of subtle hints.

I do realize that at some points, some things must be explained by a character as a resolution. That's not really a horrible thing if done in an imaginative way that is true to the characters personality. Series like Eden have this covered. The author had decided early on to put their bits and pieces of special info and terms into footnotes. Not everyone likes the idea of footnotes, but I really appreciate them. It gives me the opportunity to read them after I have finished reading a particular scene and allows the author to keep the dialogue true to the characters. I'm big on characters obviously. Dialogue can be so awful in manga, especially with the language & meaning lost in translation.

Sooo what do I think of Volume 3?? Well...obviously the above issue is a problem for me. There was much more of that crap in this volume than the two previous. They introduced a new character who is kinda interesting when considering the plot opportunities, yet I have no idea if we'll ever see the character again based on the ending. That's it.. END POST. :P
Posted by The Frog Queen at 1:47 PM