The Death Ray by Daniel Clowes 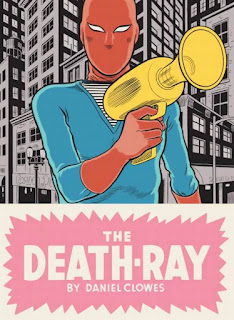 Mildly ignored and overlooked Andy is our death ray wielding hero. Hero is not the word I would use, that's just what Andy thinks of himself for the most part. Andy is our 1960's anti-hero.

The book begins with the quiet narration of a middle aged Andy, mostly detailing the events of his childhood, teenage years and early 20's. Andy tells us about his only real friends and his un-timely demise in high school. He explains how both of his parent's died and how he grew up with his pappy. He also tells us that when he smokes cigarrettes he becomes abnormally strong and can defend the weak from bullies at school. He can stand up to those  he sees trampling on the soft will of others.

So there's my little summary, but I wanna talk about poor, sad Andy. See Andy gets this Death Ray from his dead father. It was left to him along with a note detailing the extraordinary powers of cigarettes combined with his DNA (or at least that's what I grasped from it, it's all a little vague). This Death Ray makes living things disappear completely. Andy finds ways to justify using his gun. Sometimes it's in defense of someone he thinks is being abused. Sometimes it's out of self defense but regardless of when he has the gun, sometimes he takes matters into his own hands after having a smoke. He attacks a bartender after he closes up shop because the bartender was cruel to a lonely customer who explained that a loved one just died. The bartenders lack of compassion got under Andy's skin. So Andy waited outside the bar and roughed him up for his terrible behavior. Andy doesn't tell us if he killed the man.

In the end, Andy thinks he's an alright guy. He knows other people will look down on him for his actions. For me, I understand assisting someone in need, defending someone, but I cannot get behind punching the shit out of someone for being verbally unsympathetic. So obviously, Andy's view of wrong doing is clearly black and white. You are either in the wrong or in the right and he will judge your punishment as he sees fit. He can't see the difference between violent indifference and passive indifference.He clearly doesn't see his own actions as criminal. Now that's interesting, since after his first human slaying, he became quite indifferent.
Posted by The Frog Queen at 4:10 PM