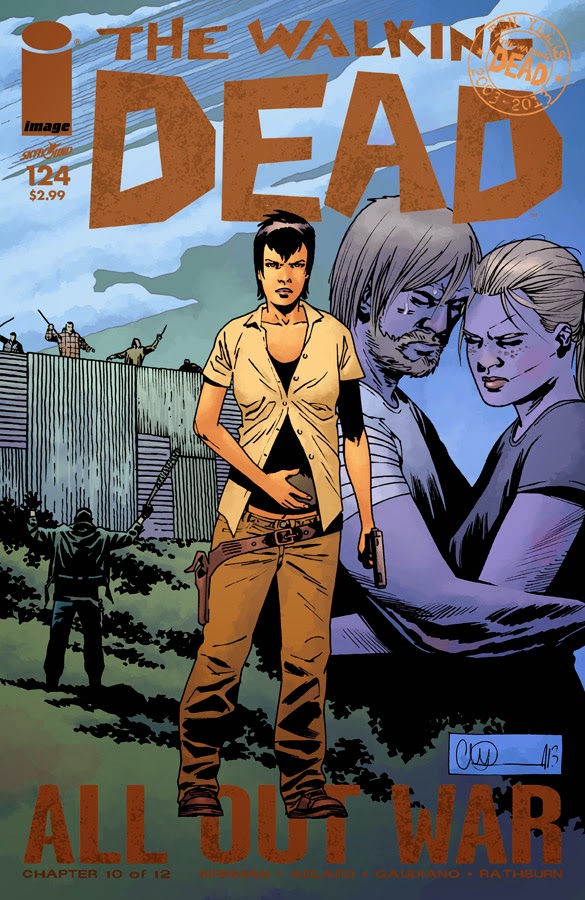 Jesus Christ!! Okay I know I shouldn't start a review out this way but I finally decided to go back to The Walking Dead (keep in mind, I've been following this series nearly since it's birth). I loved this series but the last year and half has been killing me. All Out War was supposed to end everything but it's god damn 12 fucking issues long and I wanna shoot myself rather than wait for it to end. Remember a while back when I was talking about how bad-ass Negan was? You don't remember? That's because it was over a fucking year ago. I'm sooo sick of this asshole. I want a new bad guy. Hell, I just want the zombies to start doing stuff again or play a role in the story at all.

I'll calm down now. All is not completely lost. Although Negan is still around being annoying and cursing more than I do, we do finally have the zombies back in play as issue 124 someone finally does something they should have done a long time ago - use the zombie plague to their tactical advantage. Negan gets his clan of Saviors to contaminate all their weapons before attacking Rich Grimes and his crew on the Hill Top. Okay they've attacked the Hill Top before (only about 100 times in which some people died, namely my favorite character) but this time it's supposed to end everything. Spoiler alert, Rick gets contaminated. Finally something happens.  Of course this is a cliff hanger ending. Negan pulls his troops to camp just outside of the Hill Top's zone believing everyone to be feverish, contaminated and basically freaking out inside the Hill Top village.

If Rick dies at least something will have happened because ultimately you just feel as though nothing has happened in over a year of The Walking Dead. Please tell me I'm not the only one sick of this plot?
Posted by The Frog Queen at 11:38 AM

Email ThisBlogThis!Share to TwitterShare to FacebookShare to Pinterest
Labels: All Out War, IMAGE COMICS, issue 124, Robert Kirkman, The Walking Dead