Written by Kelly Sure Deconnick
Art by Emma Rios 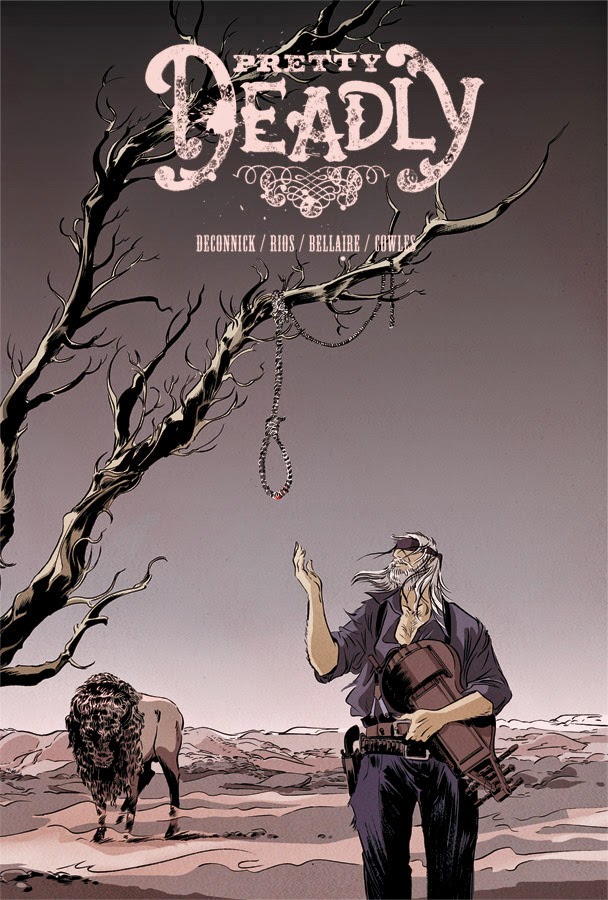 Image Comic's Pretty Deadly has been pretty damn impressive.. okay I won't do that. I apologize. Let me start over... Issue number five of Pretty Deadly marks the end of volume 1. They have tied up the story of the imprisoned beauty, death and the Mason. Basically, Ginny was called into the world of the living by Sissy and Beauty ran Death through with a broadsword. I dunno where she got said broadsword but this all take place in a world controlled by Death. If you think about it, Death made that broadsword appear. So I guess that means that Death made his own death happen. Wow, this is confusing. Suspended disbelief Amy... come on... you can do it...

Alright although that is all really confusing if you try to look at it all logically, the story is pretty great to read. Lots of blood and gore in the first volume AND more importantly beautiful fucking art. The whole way through this book has just been gorgeous. Last night, I had a dream that was completely bad-ass western. I had a giant green leather duster, and amazing hat and some bitch'n cowboy boots with spurs. See, Pretty Deadly makes for some damn awesome dreams. The part I didn't understand was why I was black, but I guess that doesn't matter.

If I actually rated comics on a scale of 1 to 10, which I don't, I give this volume like 9 cowboy boots because although the artwork pretty much rocks, I feel like there's a little something missing from the story. So you've got an odd number of cowboy boots for now and you're searching for that missing boot.
Posted by The Frog Queen at 7:14 AM