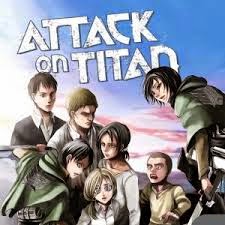 So there are different classes of titans. The humans have labelled a particularly odd set of them as "abnormals" appropriately so as they behave, you guessed it, abnormally. The like to do things like eat other titans or run after animals instead of humans. The average titan is of medium stature and sort of just lumbers around slowly picking up humans and devouring them. Actually, soon after they vomit up all the partially digested pieces because apparently they can't fully digest anything. They have no anus... or something. They don't have reproductive organs either which leads me to believe that titans hatch from eggs (sure why not?).

In volume 10, we learn that there is yet another human who happens to possess the ability to turn titan. Ymir actually. She sacrifices her health to attack the titans and save the survey corps troops stranded in the tower. That's really all that happens in this volume besides a long flash back about Ymir and Krista's pasts together. I don't understand this whole need to give us a flashback on characters that are about to die when they had no starring role before-hand. It feel very awkward to me and ill-planned. Out of all the characters so far, I think I like Ymir the best because she's calm and collected for the most part. Calculated.

Of course, I've already read volume 11 so stay tuned.
Posted by The Frog Queen at 6:58 AM