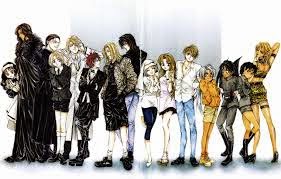 Back in my teenage years, I saw this really poorly cut OVA called Angel Sanctuary. Although it was clear it was meant to exist as a series and not a cut together movie, I was taken with it anyway. Back then I loved mythology and especially anything to with the book of Enoch and the hierarchy of heaven and hell. I knew about the manga but back then, in rural Nova Scotia before internet shopping was a big thing, there was virtually no way of getting these books. Recently however I found volume 3 in a bargain bin of random manga at Monster Comics Lounge and of course sparks flew in my brain. I immediately ordered the first two volumes online. I intend to order the entire series.

Anyway, as suspected the manga has all the details the original OVA did not. This story makes a lot more sense. So here's the run-down : Satsuna Modo is a normal highschool kid except he finds out that he's actually the reincarnated soul of Angel Alexiel. Alexiel and he twin brother Rosiel got in this huge war eons ago and both were trapped in a sort of stasis until recently due to some meddling underworlders and low ranking Angels. The war is back on but Alexiel's conscious hasn't completely awoken in Satsuna's body. But Satsuna has problems of his own. He's in love with his sister Sarah. Twisted right? Don't you love manga. I feel like I'm back in a VC Andrews book, but it's way better.

The thing about Angel Sanctuary, on top of the diverse characters, is just how beautiful it is. It's sooo pretty. When I was a teenager, I use to think Clamp was the epitome of pretty manga until I saw Angel Sanctuary pictures online. I suspect that all my follow-up posts will be fan-girl gushing over characters as if they are real. I rarely do this... I will be doing this with Angel Sanctuary. Warning, I will be all gushy and annoying from here on in when talking about this series. I love Rosiel. He's so insane, vapid and lusty. The opposite of an Angel. He's practically the devil himself. He'll stop at nothing until he either wins his twin sister back at his side or destroys her utterly. Yeay!! I love a good renegade!
Posted by The Frog Queen at 4:28 AM