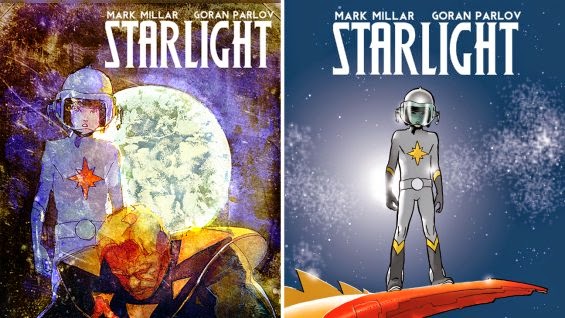 I had it all wrong when I was typing up what I thought about Mark Millar's Starlight. A friend pointed out to me that the story is inspired by Edgar Rice Burroughs and is a sort of fan-fiction in a way for John Carter of Mars. I have not read many of those novels so it didn't immediately jump out at me as such. Not to mention that fact that I didn't watch that awful movie adaptation (it looked just terrible). My friend however is a big fan of Burroughs and has read MOST of his novels. If not all.

Anyway, issue 2 opens up with a small child-like, purple haired person stepping out pleading for his life. He's only 86, so don't shoot! He's from the same planet that Captain McQueen saved 40 years ago when his air force jet flew through a rift in time and space. Here he is being asked to go back and save the planet from a new threat. This one is an alien race, there to pick off all the resources and most likely enslave the entire race. At first McQueen is reluctant, assuring the boy-man that he is too old, but of course he gives in because there would be no story otherwise.

So far, the story is fun. The artwork appeals to me and my love of a retro look and feel. It's an easy read, not heavy and there's really not much hiding in the motives of any of the characters (at least not yet). You can pretty much take them all at face value, which is perhaps because Starlight is intended for a younger audience? I'm use to Millar's gory side. I don't really see that happening here, but it's Millar... it could happen.

Before I write an article on any book or single, I keep myself from reading other peoples opinions on it. I don't want it to influence how I naturally perceive a story. Therefore, I know very little about the intentions of Millar with this story. I didn't  even want to read his interview with CBR. I'm really excited to see where this story goes without all the spoilers. ;)
Posted by The Frog Queen at 4:57 AM