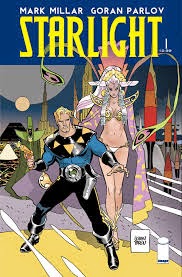 Most people are pretty familiar with Mark Millar and if you aren't, then you are at least familiar with Kick-Ass. Starlight is Millar's latest title (which I'm a little late at getting to, hey I'm one person and I have two jobs). At first I didn't know if I wanted to bother picking up this title. I thought it might be Image's answer to Saga. My love for Millar's writing got the better of me and I had to get it regardless of any suspicions.

Starlight is the story of a former space hero who settled on Earth and got himself all wrapped up in a family. With his recently deceased, he begins to long for the adventures of his youth. Those adventures happened to be helping save a nation on some distant planet. Luckily by the end of the issue, his wishful thinking becomes reality.

Parlov, having done a mixture of work ranging from the Punisher to Y The Last Man, has set the mood from the beginning of the book telling facial expressions of concern and regret while countering them in the flashbacks with vivid colors and unearthly skylines. The transition from what looks fantastical back to the world you and I know, got a strong grip on me. It just yanked me because I'm a big daydreamer and this sort of escapism I relate to. The best thing about the story and the big difference between myself and Mr. McQueen, is that his daydreams are actually memories.

I tried hard to grab a copy of issue #2 today but the local shops were out. I have a few more to check tomorrow but you can bet I'll find a copy tomorrow! Both my thumbs way up!
Posted by The Frog Queen at 2:24 PM