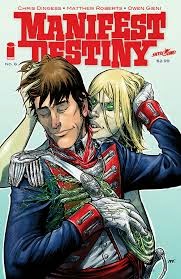 Our heroes... wait, that's not appropriate in this story. Let me start again: Our central characters who's silly decisions this story progresses around, had made the poor decision to destroy the fauna which threatens all life. Basically it turns life into living plant monsters. This plan has led them into a forest full of plant zombie animals and while some battle vicious squirrels, some battle bears. However, one is correct when they assume there is some hive mind at work here. A queen, well actually a big brain-ey flower. It's also carnivorous apparently and attempts to eat our leaders.

Manifest Destiny is one of those books that enjoys making the American hero look like a big fat arrogant moron, too caught up on the idea of glory and bravery to make decent decision.  It's the native girl that the troops are after, who actually saves the soldiers slumbering inside the flower (apparently that's what happens before you are digested-sleep).

This is what I read when I need a laugh and when I want to believe in the ridiculous.  So far the story hasn't struck me as serious which I'm actually liking. Most humorous comics bore me, or serve as spoofs for some popular drama. Manifest Destiny doesn't appear to be making life of any particular run that I know of. Therefore I find it unique and enjoyable. Usually when I see Minotaur-type monsters, I think Elfquest and then get pissed off. Obviously not the issue this time. OMG I hate Elfquest.
Posted by The Frog Queen at 10:43 AM