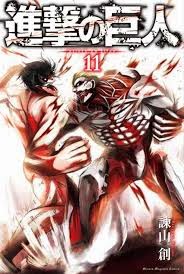 Great, now there are more human titans! Except I actually like where they are going with this addition. Bertolt and Reiner are the infamous titans mentioned in the beginning of our story. The Armored Titan and the Colossus Titan. It's implied that these two humans are in fact titans with the ability to turn into humans and not vice versa. In fact they have been living among humans, trying to infiltrate their society and learn humanities weakness for so long, that they actually think they are human. This is where all the confusion happens because part of Bertolt and Reiner remember their prime directive, kill all the humans. They start this by grabbing Eren and Ymir and running into the titan forest. That's where it all comes out.

I do like this entire idea. I enjoy thinking that Eren, our hero, was intended to be the enemy. We'll see how it all settles out. After all, Eren is the least able to control his titan powers out of all the human/titan changelings.

Volume 12 releases in Canada around the end of April. I can't wait. Although I end up disliking the story often, I just can't stop reading it. I actually want to see how it ends up regardless of my anger with the translation and the direction the story took a couple volumes back.
Posted by The Frog Queen at 9:06 AM