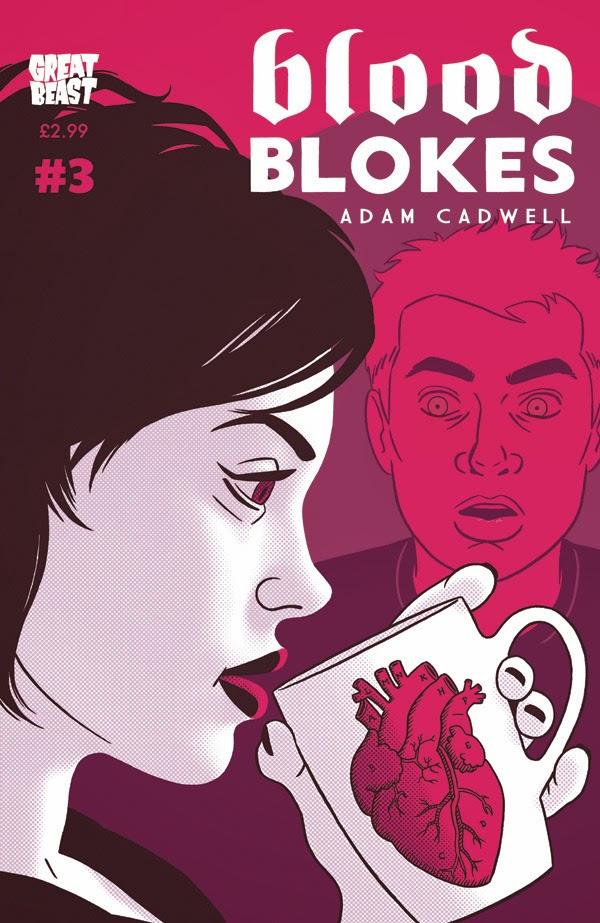 I was super happy when I got an email from Adam Cadwell yesterday, sending me a dropbox of the complete catalog from Great Beast Comics. They are a UK independent comic book publisher backing a lot of great stuff. I had first read about them in OffLife Magazine. I didn't know what to read first when I opened the dropbox file. I was familiar with the stories but hadn't read an entire issue or novel. I was familiar with the artist due to OffLife. I decided I would just start in alphabetical order, with Adam Cadwell's own vampire comedy Blood Blokes.

At first, you don't know what kind of vampire story you're getting into with Blood Blokes, but the title suggest it can't be a complete drama. Issue 1 follows the our newest inductee to the undead, before he becomes undead. Vince is an average guy, not too interested in pursuing a career, university drop-out and soon to be single guy who finds himself in the wrong alley way with a vampire bat.

In issue 2 the Blood Blokes actually locate Vince at a humorous scene of tea for cadavers at their local mortuary (I will say no more, you must read it to understand). They drag his unconscious body back to their Manchester apartment and well, the rest I'll leave for you to read.

Blood Blokes is intended to be a 6 part mini series. Issue 3 leaving on a cliff-type-hang-ey note. God I hate that/love that. It will annoy me to no end until issue 4 is released.

These stories are done entirely in black and white which most of you know happens to be one of my favorite ways of reading comics. All my favorite comics are either in black and white and 3 tones.. well with a couple minor exceptions. Although backgrounds aren't sprawling and detailed, the expressive faces of the characters pull you in. I feel like it's so difficult to draw expressive faces on characters. It's one of the largest mistakes I see in comics today - artists unable to capture the correct emotions in the faces of their characters. This story does not suffer from this problem at all. Quite the contrary. In addition, I laughed out loud a few times which confused my boyfriend because I'm not known to do that all too often. Maybe when I'm reading Yotsuba....

All in all, I am very excited to read on. It's well worth the purchase. I hear a rumor that issue 4 is being released in the not so distant future. You can get your copies of Blood Blokes through retailers like Comixology and Sequential or check out http://store.greatbeastcomics.com/.
Posted by The Frog Queen at 4:50 AM