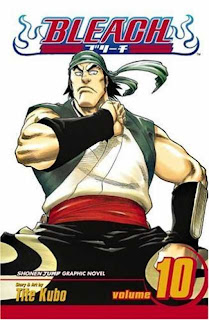 I have got a lot on the go at the moment. It's hard to believe that in one week I'll be back in school. For the first semester of the summer I am taking Astronomy and the second semester I'll be taking Intro to Psych. But enough of that, I'll get to the goods.

Tuesday I received the fourth volume of Berserk. So I dove right on into that. The other two I ordered from Indigo should show up over the next day or two. I also decided to order a bunch of random stuff from the Library. Mostly I just went on their search engine and randomly sifted through a few pages of Graphic Novel listings. I'm expecting a little bit of Daniel Clowes and some SUPER random manga. One I picked up yesterday is called Psypher and I have NO IDEA what it is about. Apparently it's popular. I've also decided to start reading Bleach although I've seen most of the anime. I'm gonna start with Volume 10. That is where I start to forget the story.

An awesome co-worker of mine just lent me the rest of Y The Last Man ! Thank you Megan! That's my weekend right there!

Lot's on the go and hopefully plenty more Tezuka in my future !
Posted by The Frog Queen at 5:52 AM