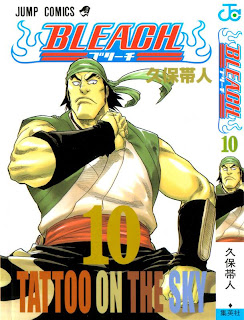 I really have to start reading Bleach. I dunno, it's a quick read that helps me get away from the tedium of the daily routine. When I'm all done for the day, all I want to do it read comics for a few hours and be transported to another world... like the characters in Bleach. This volume picks up shortly after the group lands in Soul Society. They are there to save Rukia the Soul Reaper who's been condemned to execution for lending her powers to a human.

The book is written in a light way for the most part. The first part of the series is quite comical with just enough serious drama. All the way through however, is packed with comedy relief. I like how there's a little back story about Ichigo's sister back on Earth. Ichigo is the human teenager with striking orange hair, who is given the Soul Reaper powers to fight the ghostly monsters known as Hollows. They are actually the souls of expired humans who linger on the Earth in sorrow. Eventually their sorrow consumes them and they become demonic creatures who hurt humans. The Soul Reapers are the ones the vanquish these monsters. It's kinda brutal when you consider they were once human souls. Whether you agree with it or not, it makes for an interesting story.

I do like the art but as with much action manga consisting of "monster of the week" type themes, there is a sad lack of background in most of the panels. When comparing this to something like Berserk, well... there isn't really a comparison. Most of Berserk's backgrounds are well thought out and many panels exist to give you a clear impression of the setting of each piece of the story. I'd like to see more of that in Bleach. But maybe it'll change in future volumes.