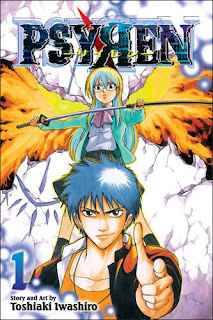 I wasn't sure about this one. It is one of the random things I ordered at the library. I actually liked it. It was appropriately violent and had cool looking monsters. Heh, I guess it doesn't take much to please me? Well I like a good looking monster. Most of the panels have a reasonably decent background, although they are pretty much thin line drawings.

Here's the synopsis:
Ageha Yoshina is the main character who gets this bizarre red phone card. Rumour has it that they come from a mysterious gang called Psyren who everyone in Japan is curious about. Who is Psyren? Is it a person? There's a reward of millions of dollars to anyone who can provide answers and a real red phone card. People are selling fake phone cards for millions and rich people are buying in hopes of solving the mystery. Meanwhile people are disappearing all over Japan.

Ageha is skeptical and tries out the phone card in a nearby phone booth. He gets an automated message asking him  to take a survey that last 62 questions however, as he becomes bored the strange voice on the other end starts spouting secrets about his life that no one could know unless he's being watched. Mayhem happens and eventually Ageha is transported to another world, a deadly world which appears to be some sort of game : make it to the gate alive and you can go home.

I won't go spoiling the rest of the stories finer points. I like enough to order the second volume though, that is if the Library has it.

One more thing : this cover is totally unattractive and lame.
Posted by The Frog Queen at 1:09 PM