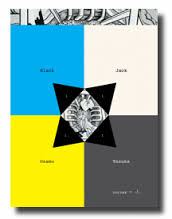 Wikipedia says that this is Osamu Tezuka’s third most successful/popular series. It apparently comes after Astro Boy and Kimba the White Lion. I did not initially have too much interest in the series when I read the synopsis but I’ve been having a difficult time getting the books I want as of late and decided to just order random things from the library. Also, I’m still intent on trying to read everything Tezuka has done.


I am enjoying this series and I didn’t expect to. Each chapter is a separate story about Dr. Black Jack who is an unlicensed medical doctor. He performs the miraculous and teaches lessons to the less enlightened. The stories can be read out of order but they also remember history if you read them in chronology.
What appealed to me most in this series was the gore. It's something along the lines of Junji Ito, or perhaps this is where Ito got his inspiration? My love of body gore aside, Black Jack does have a mild version of it. Early on Black Jack operates on a sick woman who carries in her body, the living and sentient tissues of her twin. The swelling is known as Teratogenous Cystoma . However, this one has a sentient brain and all the necessary organs to make up a person. Lacking a few pieces and a body to encase them all. It's here where elements of science fiction and fantasy seep in as Black Jack removes the telekinetic twin and reassembles her into a prosthetic body. Black Jack is always performing the impossible and very often replaces body parts in the living with that of the recently deceased. He actually does a brain transplant in one story. (This of course is too fantastical for me but makes for an awesome story with a terrific ending).
Posted by The Frog Queen at 8:56 AM