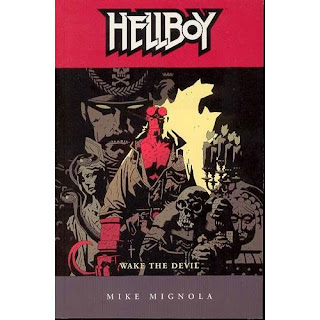 So don't laugh at me. I haven't read the first Hellyboy comics. I got caught in the Hellboy web around 2 years ago. I just jumped into the series. I'm going back over things now. I am really enjoying the background. Finally I know something about Ilsa. She's one messed up Nazi, not that all Nazi's aren't messed up... I should just change the subject.

I find early Hellboy to be a lot more brutal than I had imagined. Ilsa shoved herself into an Iron Maiden to let her blood flow out from her. Rasputin assures that her allegiance will allow her to live forever. Her real goal to get her lover back. Another messed up Nazi that just happens to be a vampire.  I'm not that big of a fan of Rasputin as the antagonist. I like the stories and mythology behind Rasputin but I'm not terribly fond of him in Hellboy. I also don't much care for the whole Nazi angle. In fact, I don't care for Nazi's in my fiction at all. I guess because it's just too hard for me to sympathize with a Nazi and for whatever reason, I like to be able to sympathize with the bad guy. More three dimensional, more interesting, more realistic.  I can't sympathize with Nazi's so they tend to make really boring villains for me.

Other than that, I'm enjoying these early books. I have a lot to catch up on ! 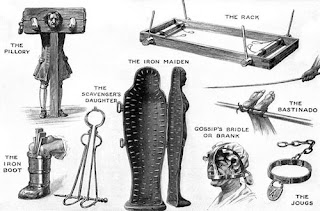