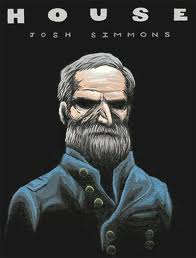 This is a curious book. I have only previously seen some of Josh Simmons work here and there. I initially picked this book up due to the cover. Creepy right? It sort of also reminded me of French style animation. Once into the book, which is completely devoid of words, I realized that Simmons' art style was recognizable but much had specific characteristics that set it apart from what I initially thought the inner art work would look like.
This is Josh Simmons debut graphic novel. It's rather frightening and there is some confusion in my mind as to whether there is a haunting going on, or just the rattled nerves of a few young people.
The story follow a trio of teens (I'm assuming they are teens) as they go on a mission to explore a strange old abandoned house. It starts out light hearted enough, with perhaps a bit of a romantic crisis happening. You can only suspect since no one says anything. The dark haired girl is the third wheel and the two blonds are the happy couple from what I can tell. In their exploration, they become separated by the decaying structure. It appears each of them struggles with their will to survive, then realizing they are lost. It's pretty disturbing actually, as each one accepts their fate which seems to be death in a dark, small place. If your claustrophobic, this may terrify you. Once the team is separated, Simmons starts laying out each page in darkness and it all becomes somewhat minimal and not unlike an animated flipbook, only this is done with un-mapped panels.
My bf said that they are going through the stages of accepting death. I've never been in a near death experience so I wouldn't know personally. The Kubler-Ross model, or what is knows as the five stages of grief". They are apparently, denial, anger, bargaining​, depression​, and acceptance (in no specific sequence) and as you can tell from watching the characters, each one of them goes through the stages in a different order.
I'd recommend this book to anyone who has 20 minutes to spare and flip through. I'd recommend going through it more than once to father all the facts from the illustrations.