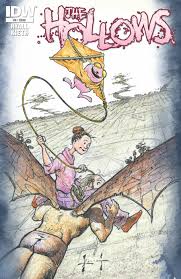 Quantum got my subscriptions all sorted out and I'm back on track with The Hollows. I'm completely excited about this series. We all know how I feel about Sam Kieth and this new more minimal style is pretty exciting for me personally.

-The color pallet. Kieth makes use of pinks, blues and yellows just like the cover. Every now and then there is smattering of red but it's really all very grey scale for the most part which I think fits well with the whole apocalyptic world.

- The fact that Ryall and Kieth have no issues killing off characters. It always makes for a great story.

The series is now over. This was a mini series (which I think deserves another chapter), that ends with issue four. Sadness. Time to look forward to what's next for Sam Kieth. I read that The Maxx is being re-released with all new covers. I'll keep my ear to the ground on what he's up to next. Worlds of Sam Kieth was released recently in hardcover. I'd like to get my hand on that eventually. Ultimately, I want an interview but that may be too much to hope for. Maybe I'll go back and re-read Zero Girl.