Barefoot Gen Volume 2: The Day After by Keiji Nakazawa 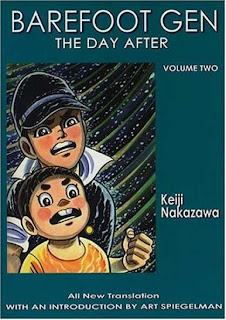 Not that I want to bring you down or ruin your beautiful Nova Scotian summer day (seriously it's actually nice out here today), but you should really read Barefoot Gen. I can't lie and say you won't cry. You MAY cry. It really depends if you are moved by a child's sincere and honest reaction to tragedy happening around him. Tragedy like melted faces, bodies being burned in mass graves, half-living burn victims being burned alive in piles of corpses and lots of body parts strewn about. If you have a heart of adamantium alloy, you'd still find yourself weepy, unless your a monster.... or hitler (can never bring myself to capitalize hitler).

Barefoot Gen is an autobiography that is both shockingly honest and curt, so much in fact that it knocks your sense of reality over (I think it has affected my inner ear). It pulls you into a past you have only read about in history books and forces you to see the true horrors that shook Hiroshima. As Gen struggles to accept bombed Hiroshima as his new reality, you find yourself viewing the horror in as much disbelief as him. I know North Americans are somewhat desensitized to violence and gore, but the actual lack of depicted gore in Barefoot Gen make it all the more haunting and horrific. What is not shown your brain easily fills in and it's terrifying.

In volume 2, Gen is sent out by his mother to first look for rice. As the only male survivor of his family, Gen remembers his fathers words which urge him to look after his mother and new born baby sister. It's during this quest for rice that the reader sees the terrible aftermath of the bomb through Gen's eyes.

Eventually Gen's mother decides they must leave Hiroshima which is drowning in corpses and radiated bodies, to stay with a childhood friend. Unfortunately the family sees Gen's and his mother as a terrible burden and begin to torment their guests.

The story shows just how cruel humanity can be in the face of tragedy more-so than how generous they can be. Yet through it all Gen preservers, never losing hope or faith in his ability to overcome such vile circumstances and loathsome human behavior.
Posted by The Frog Queen at 11:39 AM