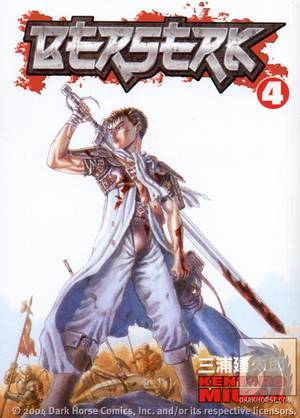 Volume 4 gives takes us into the past. Guts is raised by a terrible person named Gambino. Guts is treated mostly as a cursed animal and Gambino even sells his body to other mercenaries. It is a terribly sad story. He's 11 by the time he slays his so-called father, the only father figure he's ever known actually and they are not biologically related. In the end, Guts is run out of the mercenary group, wounded and followed by a pack of wolves. Eventually he ends up running another group of Mercenaries called "the band of the hawk" and finds his place there. It's a violent, disturbing story.

I am really sad that I don't have any more Berserk to read at the moment. MUST GET MORE. I really do love the art style. I like it when a manga has characters with distinguishable characteristics. I find a lot of newer manga has the recycled face look.
Posted by The Frog Queen at 12:11 PM