The Legend of the Scarlet Blades 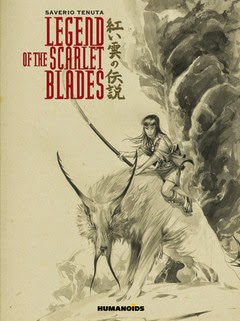 Last week Humanoids released this beast on the English speaking world. The story centers around a one-armed Ronin with no memory of his past. Italian artists Saverio Tenuta started working with Les Humanoids in 2006 when the first four volumes of Scarlet Blades had been published. Initially I was completely taken by the tortured beauty of the book. The whole book looks as if it was painted with blood for all the red that was used.

There are a lot of familiar looking characters in this book, the spirits may remind you of the spirits in Miyazaki's Princess Mononoke. From my paltry knowledge of Japanese mythology, these artistic interpretations are based on ancient accounts. That being said, isn't it pretty!? In this story there is a character who was born disfigured and has rebuilt her body using magic. During her rituals many of these little white spirits appear and that greatly reminded me of the kodama (little tree spirits) in Princess Mononoke. Additionally, the giant wolves which threaten the people of small villages in this fuedal Japan, may remind you of the giant wolves in Miyazaki's masterpiece. However you will find stark differences between them, I can't help but think Tenuta was greatly influenced by Miyazaki. I have to say I enjoy Tenuta's linx-eared wolves a great deal more aesthetically.

In the end, this story is a dramatic one, but also a book you will find a great deal of trouble with in terms of putting it down. I was taken with it's beauty but the story itself is one that will leave a last impression.
Posted by The Frog Queen at 4:35 AM