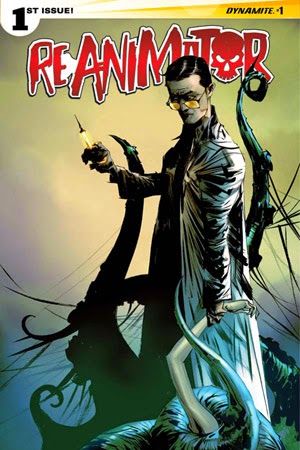 I couldn't be more thrilled with the new comic book series. The scripting is witty and captivating. I can hear the actor Jeffrey Combs's voice clearly in my mind as I read the lines of Dr. Herbert West in print. It's not the first time that the story has made it's way into comic form. Dynamite has published different variations stories of the Reanimator several times and they go down in absolutely expertly told Lovecraftian history. The original story written sometime in 1921. Take that modern science fiction. You throw some Cuthulu in there and what is there to complain about!? Nothing really...well... one minor complaint, another damsel in distress, another female love interest and why would anyone fall in love with creepy old Herbert West?! This is where suspended belief really comes into play.

All in all the artwork is pretty typical for Dynamite Comics. Randy Valiente is not really barking up my artist tree but he's clearly talented however, a little uninspired. I guess if Paul Pope or Tyler Jenkins drew every comics, I'd probably be in dead and in my own little slice of heaven. So what are you gonna do? All in all, fun read. The mini series ends at four so check it out before it's over!