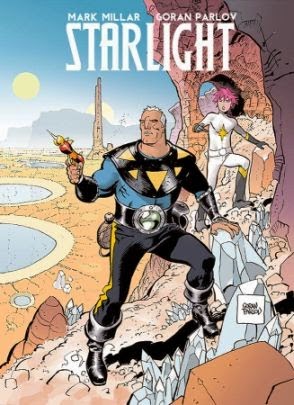 I still love the artwork. I had a conversation recently with a friend who mentioned that the artwork was wearing on him with this third issue but I disagree. I'm still very impressed with Parlov's style. Ultimately this has become one of those issues that I get excited about when it's release date rolls around. Oooo another installment.

I am a hopeless sucker for science fiction and I'm an even larger sucker for worlds controlled by media. In Starlight, the distant planet is controlled by a tyrant who uses televised propaganda. This chapter finds McQueen incarcerated after attempting to exert a little vigilante justice on some crooked law enforcement. He now awaits execution, yet there are those who will stand together to bust him out.

This actually makes me hopeful that when I pick up Millar's MPH, I may be very happy with it. I'm not always thrilled with Millar. I'm hoping Starlight is the beginning of a new golden era for him. Some people will argue that this began with Kick-Ass but I'm not quite sure about that one  ;)
Posted by The Frog Queen at 10:31 AM