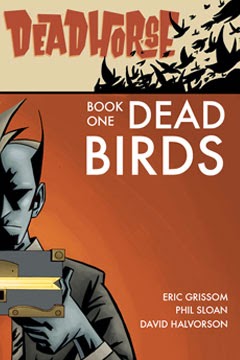 A couple weeks ago I received copies of Deadhorse and didn't even know it! That's because gmail sent them to my spam box and two weeks later I uncovered them. Note to self: check spam folder more regularly.

I am really happy I unearthed these digital gems because I ended up giggling delightfully while reading through. Laughing because the story was legitimately funny (not laughing because it was so awful it caused me to laugh out loud which honestly, happens pretty regularly). Mostly I was just in love with this silly character named Frank who created an alter ego for himself named Sasquatch! The way he's written into the story is quite brilliant. He shows up just when a family is debating the existence of Sasquatch and well, tips over a bus. I also can't help but be a sucker for his dedication to speaking in the first person.

Considering it's pretty much impossible for me to explain this story to you in any way that would make sense, here's what the website says:


"Deadhorse is the story of William Pike and the key to a fantastic box of unimaginable power."

I have to admit I was a little confused about this key and why everyone wanted it so badly. So I asked Eric Grissom for some answers and this is what he had to say:

"As far as the key, the only thing that's really important is knowing the key unlocks the box and the box "makes" things.   When Pike finds Dr. Conroy in the fifth chapter of Dead Birds ("Wake"), the doctor speaks about this idea.  There's a lot more to it than that, but I don't want to spoil anything for you.  You'll learn more as the story goes."

OMG I wanna see this box (that was not supposed to sound dirty). I have read the continuation of this story, The Ballad of the Two Headed Dog # 1, which is currently available through comiXology. It really does leave on that cliff-hanging note where I just really need to know what this key is all about!! Grissom and Sloan have successfully ensnared my curiosity, a willing captive waiting for next piece of the puzzle.