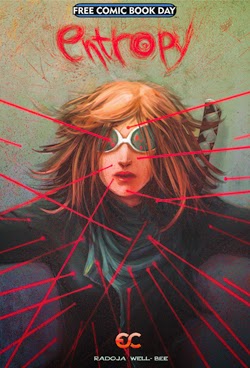 The only free comic I picked up from Free Comic Book Day was Entropy. This is because I feel like the day is more for children, and to convert new people into the world of comics. Not really for people like me who already consume massive amounts of comics per day. For me, the day is more for the deals at the locals stores. I'm all about discounts.

Anyway, I did pick up this science fiction, dystopian story.  Here's the synopsis:

I really wanted this to be a great story. Gee, I hate beginning to talk about a comic like this. It's never a good sign is it? I try to be as honest as possible without getting too insulting or mean. Let's see how it plays out in this article.

I should first say that I initially liked the artwork immensely. When I picked up the issue in the store, I flipped through it and decided to hang on to it because of the artwork. It was also the first thing I read when I got home which Chris made fun of me for. "You just bought over 20 graphic novels and the free comic is the one you read first?"  Well, it was new ;) The books I bought are all old news lol. Unfortunately, it was really GYO I should have read first lol. If I wanted to enjoy myself.

I immediately started getting cranky with the writer and I took a few pics and posted them on twitter with mildly snarky caption. I figured this must have been the first graphic novel project for the writer. This doesn't appear to be the case. In my serach I found another title, Miracle by author Davor Raroja from last year.

Let me address my major issue with the writing and skip over the fact that there is nothing new or exciting about this world. This author is guilty of committing the ultimate act against good comic writing: stating the obvious within dialog. He also did it more than once. I tweeted about two of them because I was in a sort of shock at how stupid silly the dialog became, tarnishing the story for me.

I don't wanna be too hard on the comic. I kept thinking, it's not the artists fault. Well-Bee did a fantastic job. I really did the "multiple pencil stroke" look. Or at least that's what I've dubbed it in my terms. Kind of a scribble look. At any rate, pick it up for free but I won't be looking for this in my subscriptions box at Quantum. The ride ends here for Entropy.