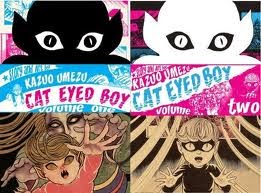 Sometimes I think I'm more in love with old manga than I am with present day comic book artists and writers. Especially lately, where I struggle to find anything I'm wowed by. Besides Alison Sampson's stunning work on Genesis, I have been more absorbed with Japanese comics.  Kazuo Umezu was born in 1936 and apparently this odd looking senior-hipster, caught-in-a-time-warp, is still alive. It isn't apparent that he still creates manga although he had a career as an actor and a musician. Jack of all trades they tell me. I lie, Wikipedia tells me.

I was riffling through stacks of manga at Hairy Tarantula in Toronto looking for something new to read going "read it, read it, hated it, read it, don't want to read it, hate that author, read it, read it, ooo I should read that again," when I stumbled on these Big Viz books. Viz prints a lot of manga and sometimes they put out these amazing larger books and this one caught my attention. I picked it up, flipped through it and bam. It it me! Wonderful, disturbing horror! I have I found another Junji Ito?!? No, no let's not go that far. I have found something truly awesome though. Now I have to order the rest of his work.

There are two volumes of the Cay Eyed Boy. This unfortunate child was born with monstrous features resembling a cat. He was cast out of the town he was born in and wanders Japan looking for shelter and food. However everywhere he goes, destruction and horror seems to follow. He's a walking omen and everyone fears him. Even those he tries to help. Despite how cruelly he is treated, he often acts out in the best interest of others.

There is a bit of body gore within the pages of these books and that's what really appeals to me. Although I would describe the pictures as more juvenile, less emotionally and psychologically rattling than that of Ito, they have a special quality that shakes you. The stories center more around myth, monsters and perversions. There are mad scientists and superstitions. It's less about people who are going utterly mad, or a distorted world and social order. The cat eyed boy is painfully aware of the trouble his presence causes and how people revile him. 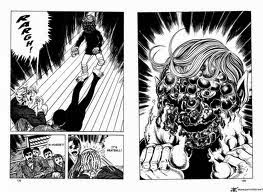 I would recommend this to seasoned horror fans, and newbies alike. The stories are unique and engaging. Plus Umezu is not without a sense of humor.
Posted by The Frog Queen at 5:22 AM