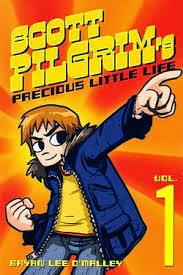 This is one of those series that I never picked up during it's initial release. I dunno why...I guess it just wasn't the type of artwork that spoke to me. Most of the time I want to read horror, fantasy and be as far away from real life as possible. Lately, I've been into a bit of comedy so I picked up the six volumes and dove right in.

It's everything I suspected. Lighthearted and silly with loads of jokes but I didn't immediately expect that the characters would all be so.... pathetic. Yet at the same time, they remind me of so many people I know from my own days playing in a band. I kinda felt the same way about all those people. With some Zelda references in there to make it extra nerd friendly (just for me, I must assume) the story reminds me of butting heads with ex's from other bands at gigs and the general girl on girl violence that occurs in a early 20's something hipster type scene (which I'm not so proud as to say I was involved in some 10 odd years ago). Boy what a mouthful (that's what he said), sorry about that one.

Cute story (maybe, maybe not), a coworker of mine has a friend who totally moved into Bryan O'Malley's old habitat. Apparently they found a mountainous stash of sketches by the author. She said they saved a couple and burned the rest. Pretty lame hunh? That's what happens when non-comic book people take over old houses that famous comic book artists use to live in. One man's junk dude.... one man's junk! (Not that kind of junk gutter-head.)

This is barely a review I know, it's more of... here's what I think. It's great. I don't feel like writing a review on something that has been reviewed to death, not to mention turned into a major motion picture. It's a fun read and if you're a big nerd who played in bands, then read it. Even if you're just a big nerd who likes to poke fun at people and enjoys old video game references, read it.