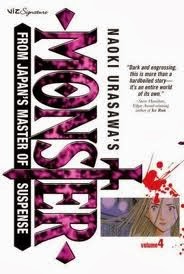 This is probably my favorite volume thus far in the series. It was full of action and amazing developments including the reappearance of Johan's sister Nina. It's in this book that I grew really attached to Dr Tenma's now little sidekick Dieter. He's a brave little boy who has become fiercely loyal to Tenma and anyone who aims to protect the doctor.

The book is full of the usual unique looking characters and once again there is more Tezuka inspired appearances. Some of the characters look straight of books like the Phoenix Saga. Others resemble Astro Boy which of course must have been a favorite of Naoki.

Finishing this volume made me immediately read the next 2 in the series but I regret that I have run out volumes to read for now. More in the future.
Posted by The Frog Queen at 6:02 AM