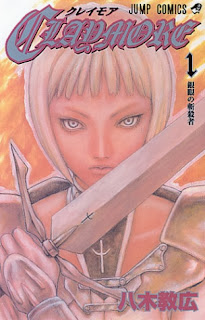 I wasn't totally sure about this one. It came recommended by several anonymous forum maniacs. I call them manics purely because of the sheer amount of topics they see fit to comment on. You know those people, the ones that have something to say about "eveerrythiiing". *giant eye roll* It's like that awful sales man who works at your local comic shop who asks you if you need help finding something and then immediately begins to berate you for your request. It's like that except sometimes they have something positive to say about a comic. Anyway, it came up while I was looking for something that may be as awesome as Berserk.

This is a story about demons. Half-demons taking out full-demons known as Yoma. This is not new to Manga, we've read this book often. What is more interesting is that so far, it does not appear to be a love story. Furthermore, the main character is female. Unlike some of our demon-cursed manga heroes like Inuyasha. Sure, there is some fan service. The first volume has at least 4 bum shots and plenty of suggested nudity, but you can't get too upset about it. It's manga... if it's targeted at 14 and older, there is going to be nudity. Deal or ditch.

As for the artwork, it's quite clean and uncluttered. I do enjoy the smaller eyes which make everyone look a little sinister. I will be checking out volume 2.