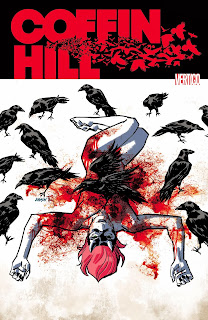 I never considered myself absurdly hard on comics (teehee, I just said hard-on) but after reading Coffin Hill I started thinking, maybe I'm kinda picky. Let me try and focus on the good stuff... the art is pretty decent. In my opinion, it's very fitting for the time although not at all my style. It's super clean and crisp which attracts the Marvel readers for the most part. It's not UBER realistic looking but the characters are proportional in body making them somewhat less "cartooney". Spanish artist Inaki Miranda is talented, there is no doubt but his style just isn't for me. We all know where I dabble in terms of art.

Caitlin Kittredge isn't exactly writing something entirely new. Secret, teenage seance's have lost their appeal on my generation (must of been the movie The Craft). The story centers around lead character Eve Coffin who apparently gains some evil powers she wields of her own accord. The story starts in the present, diverts to the past for a little re-cap on how she got to be this doomed vixen, then meets you in the present for the final pages of the issue where Eve is a cop. She had just caught this apparently famous serial killer known for dumping the bodies of women in a frozen river. Eve Coffin is a rich gal with super powers. Her family has some claim to fame as being multi-millionaires and in possession of ancestors who were hanged for witchcraft.

The witchcraft card is hard to carry off. It's pretty cliche, (like the rebellious teenager dressing up in devil horns and running off into the woods with her friends after ruining her parents party). You know what though? As re-hashed and over-done as the elements of this story are, I might actually pick up the second issue. The third to be released this Wednesday. It wasn't an awful story. It just wasn't terribly new. The pacing was alright and who knows, there could be some surprises! Right now, one can't really tell where the story is off to.