Hawkeye, Vol 1: My Life as a Weapon 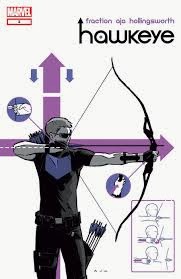 I'm in love. Yah yah, I know you know. Did you know I was in love with David Aja's art in the latest Hawkeye series? It's one of the only Marvel comics I've picked up in the last three years. It's the only series, I'm actually going to continue to read.

I have to say the first and last chapters of the book are my favorite. Maybe because they center around Arrow the dog. I mean, the first story is so adorable! All about how Barton runs into this awesome doggie.

The second story is told without so much script as it's just what Arrow sees and hears. Of course he doesn't understand English as he's a dog. Most of the scripting is nonsense. I love it.

I absolutely love THIS Hawkeye. His down-to-earth attitude and pretty much everything he says is makes him the coolest Hawkeye ever. Fraction reminds the reader through repetition that Barton is just a regular guy who happens to be a pretty good shot. Oh and of course he did that whole thing with Avengers ;)

I like how this book feels like a complete book. Too often trade papers and hard covered editions of our favorite monthly series are released without any thought to being in that medium - a whole, complete book. A beginning and an end, even if the story is left to continue on. Sometimes you get the book and it just ends in the middle of a story arc without tying anything together, without anything to pull it together and make it feel whole. It's just a collection of singles. Might as well be an f'n "Best of" release. Fractions use of the dog Arrow, to open and close the book, ties everything back in a neat package while allowing the story to continue in another season of singles. It's brilliant and heart warming. Who doesn't love a doggie side-kick? ;)

Email ThisBlogThis!Share to TwitterShare to FacebookShare to Pinterest
Labels: David Aja, Hawkeye, MARVEL, Matt Fraction, My Life as a Weapon