King of the Flies: 2. The Origin of the World By Mezzo & Pirus 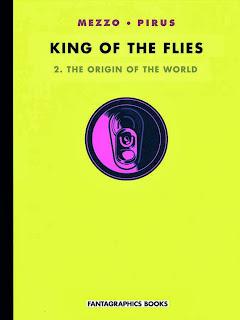 I had to wait nearly 6 months to get this from the local library. Some dude had it for about that long... I don't wanna know the late charges. Anyway, this is the sequel to book 1 which was subtitled Hallorave. Great book. You can find the review for that one in the archives. Anyway, this one kind of flips back and forth through time and slips a little more into the morose and macabre with our skeleton-dressed, raver friend narrating most of the story... from the dead. Some of the story is told from different points of view about the same event.

Most of the plot revolves once again around Eric, who is a selfish little pretty boy with a big chip on his shoulders and a blatant disregard for... well everyone. He reminds me of a few people. His more introspective self reminds me of me. Only because sometimes he gets too involved in dissecting his own discomfort that he misses things that happen around him. I do that a lot. Eric should try to push the focus out-ward. I'm working on it.

I feel like most of this book is about missed opportunity, the dangers of focusing inward and lack of focus on the present. Very rarely do the characters actually get into trouble for making poor decisions as a reaction to the present. They pretty much just react to their feelings that re-surface whenever they re-visit the past in their heads. Unfortunately, it's their present that suffers every time. Not to mention that they can't stop abusing substances. Even Marie's mom ends up walking out into her neighbors BBQ wearing nothing but an Astro Boy mask and an open shower robe. She was popping tranquilizers and sipping wine in the bathtub until her husband walked in and took a piss. You see where all this is going. Pretty depressing and great actually. It was a really good book. Now I gotta track down the third installment.

A lot of people have compared this to Black Hole by Charles Burns and although I see where they are coming from.... my two cents?? Fuck Black Hole. Read this book.
Posted by The Frog Queen at 4:40 PM

Email ThisBlogThis!Share to TwitterShare to FacebookShare to Pinterest
Labels: Fantagraphics Books, King of the Flies, Mezzo, Pirus, The Origin of the World, Trilogy