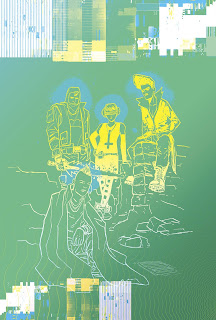 The Tomorrows is making brave new waves in a sea of science fiction hellbent on sitting in the horror genre and space. A breath of fresh air against all the dystopian stories, this one focus' on the elimination of creative thought. A world where art is treated like a controlled substance. I got to interview Curt Pires about it earlier this year. Check out what he has to say about this mini series here!

I was delighted to know that resident Canadian Jason Copland (POP) was illustrating the first issue. Each issue, of which there will be four, is illustrated by a different artist. Issue two is illustrated by Alex Zirit (Space Riders) who I am also a big fan of.

Jason Copland's contribution to this series is phenomenal and colorist Adam Metcalfe suits the illustrations perfectly. I've said it before but I'll say it again - I feel like Jason's work has this vintage, timelessness to it. Sounds like a bit of a conundrum but I feel like a lot of that 1950s feel has stepped into timelessness. Maybe it's just the lack of cellphones lol! JOKING. But it really is gorgeous. I'm so thrilled Dark Horse has such good taste.

The story is centering around a group known as The Tomorrows who are militantly fighting for freedom of creativity and thought. They fight against giant corporations who now run everything. With corporations like Facebook, they've used our identities against us and thus can monitor our creative output. That, and the head-hauncho is a sadistic, hedonist apparently. I kinda like him.

All in all, I'm pretty happy with this beginning. It's solid, intriguing and full of witty references to things from well- our century (who is apparently also to blame for the theft of the creativity in the future i.e. fucking around on social media). So in the end, with all things considered I give it a solid five stars. Great art and lots of action and adventure.