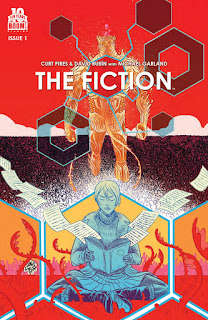 I really loved the cover of this issue. It drew my eyes in immediately. The reason I read it was because I noticed it was written by Curt Pires and I really loved his collaboration POP, which came out last year from Darkhorse. The Fiction is illustrated by David Rubin who received praise from Paul Pope, which is kind of a big deal to me. To my (perhaps limited) knowledge, Pope doesn't just throw his praise around willy nilly. That being said he also employed the man to do Rise of Aurora West.

So the story follows four children who are transported to a new world after having read from a few mysterious books. The children full grown fifteen years later are struggling with news that two of their childhood friends have disappeared. Each leaving behind only one piece of evidence that points to their whereabouts, a volume of those strange books. Nothing brings childhood friends back together like tragedy.

It almost reminded me Chronicles of Narnia, or The Neverending Story but then felt somewhat sinister with the Epilogue (yeah there is an epilogue at the end of the issue). I think the Epilogue might have been my favorite part simply because it's so bizarre and beautiful. Anyway I got this Steven King's IT vibe just because the story is about children witness to something crazy and dealing with it as not-so-secure-and-stable grown ups.

All that said, it was a really lovely read. The artwork is beautiful throughout the entire issue which a special emphasis on this page I posted to the right. It does feel like its intended for all ages but I can't say just yet. The Fiction has all the mystery and wonder you need in a book with such a title and possess the timelessness required to make it memorable.

I intended to do an early review of the book but whilst reading it digitally, three pages in on my phablet, I decided it was too pretty not to read on paper and promptly waited for the hardcopy. Sadness that this is a rather brief story with only three more issues to go. At least you can always count on a mini series to have a proper ending. Well, most of the time and you haven't been reading forever building up to nothing. But I will get into disappointing endings some other day. FIVE STARS.