Exclusive Interview with Juan Ferreyra on Colder: Toss the Bones! 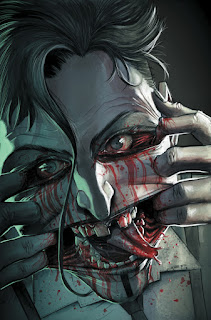 I really enjoy the Colder series and I got really excited when I learned there would be a third story arc! Juan Ferreyra has been haunting the pages of the comic book, bringing nightmare to substance in these chilling tales. He's created unique, creepy ghouls that keep me coming back for more. Whether it be finger monsters or straight-up gore, I know I'm never going to be disappointed by a single issue. I got to ask Juan a few questions about the upcoming story arc, slated to debut this fall (September to be precise!).

TFQ: In the last story arc, Colder: Bad Seed the reader followed Declan into an unseen world. Can you give me any hints on where the next chapter of Colder will take us?

Juan: Colder will take us deeper into the Hungry world, they seem to return to that damn place all the time, This time Declan will try to find a way to stop the traveling , even if means to let himself die.

TFQ: How many issues should we expect from the third installment?

Juan: Is another 5 issues and the last issues, the story finished in this third volume. One of the things I love about Colder are the crazy ghouls!

TFQ: What sort of ghouls are we going to be seeing this time around!

Juan: Nimble Jack in the first issue has a new horrific friend that likes to travel with him around. And probably a some new monsters that I haven’t designed yet!

TFQ: Can you tell me a bit about what inspires the physical appearance of the devilish creatures and demons of Colder?

Juan: I tried to have normal things, relatable things and mixed them up to come up with weird twisted creatures.. In Colder vol 1, I took arms and use them in different ways, I took eyes and used them as well, in Vol 2 I sued fingers to create creatures, in Vol 3 we’ll see pigeons, fingers, arms, eyes, bones, legs, teeth, dogs, all mixing up!

TFQ: Can I ask you what your upcoming projects are?

Juan: I'm working On Gotham By midnight right now, for DC comics, with Ray Fawkes writing, my first issue #6 came out this past WednesdayI'm also doing cover for New Suicide squad for DC and finishing COLDER:Toss the Bones. After that I still don't know what will I do. I'll be doing some concept art for a couple of movies and a TV series too.
Posted by The Frog Queen at 3:42 AM