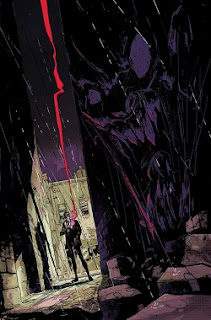 I love Hellblazer. If you're just tuning in, you may not know that so I'm telling you... I love Hellblazer. Favorite Hellblazer writers include Mike Carey, Peter Milligan and Garth Ennis. Yet I pretty much love everything that came out.. with a few exceptions. Wasn't big on the whole Highwater nazi thing. Anyway, when I heard that Hellblazer was coming back and DC was finally ending their horrible title Constantine with the New 52, I was thrilled. Thrilled because Riley Rossmo was announced as illustrator with Ming Doyle and James Tynion IV as writers. So let me tell you what I thought eh?

Initially, I love it. I mean, John is a his regular smart ass self. He's perhaps a little more confident rather than reckless but there's still a good shot of recklessness in there that I've always loved about Constantine. With Rossmo drawing him he's quite possible the most handsome John has ever been. I for one have always appreciated the stories written around John and not so much as thought of him as handsome as some would believe. He's someone I would have dated in my 20s but probably someone I'd punch in the face if I met him now. Nonetheless, John is basically back to being written the way he should be. Keep in mind he's young. So we're starting all fresh and new and leaving, at least Peter Milligan's old man Constantine in the dust.

We don't know what year it is. Could be modern day, might not be. I can't tell. I'm not going to spoil the plot for you, but this issue feels more like a reintroduction than an intro and segway into a whole story arc. A contained story within one issue and that feels right.

All in all, I'm really happy John is back and not being written by Ray Fawkes. I'm glad he looks and sounds familiar. His inner monologue though definitely unique from the Johns so long ago, still feels like a John Constantine. Oh and did I mention the book is beautiful? I'm in love with the colorist they chose Ivan Plascensia who has also made Riley Rossmo's book Rasputin one of the most gorgeous books of the year. Ivan's coloring is unmistakably his and seeing it in this issue made me very happy. It really is a beauitul issue. 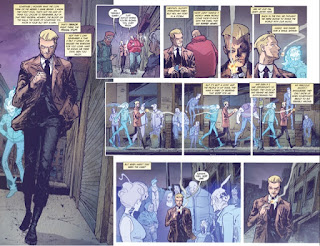