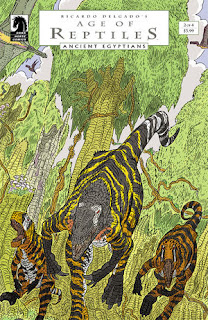 Writer and illustrator Ricardo Delgado started Age of Reptiles a few years back. Darkhorse put it out and it due to it's success they've subsequently released a few more titles under the series. The latest of which is Ancient Egyptians. This story available July 1st follows a Spinosaurus as it navigates a swamp full of hidden dangers.

I really enjoy Ricardo's artwork. He's one of those heavy dash- pencillers but that's just a word I made up. I'm sure there is actually some kind of term that describes this style of illustration, but I dunno what it is. I even tried to google is but couldn't come up with anything. I suppose taking art history might have been useful.. maybe... Anyway, I really like his artwork and it reminds me of the sort of stuff you would see from the Prophet series... which is currently.. on hiatus I believe. Interestingly enough Ricardo's previous experiences includes some movies. He worked on Men In Black and The Incredibles which is kinda crazy.

So this book is a wordless journey and fit for all ages. In fact, I think a lot of children will love absolutely love this because what children isn't completely fascinated with dinosaurs..okay maybe not the creationists but that's only because their parents probably said that dino's were a lie created by satan... or flat out called them demons.

Ricardo also has a pretty well kept blog which you should check out because he does post a lot of his work. Always nice to get that insider look: http://ricardodelgadoart.blogspot.com/

For me this is a solid four stars. The only reason I didn't give it five, is because I would have preferred a little more action. Still, it's fantastic and has that rawness I like in my artwork.