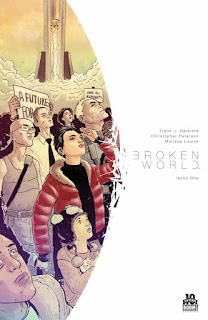 The cover sucked me into this one. Boom studios has done this to me a few times this year. So what is Broken World? It's a new take on the asteroid-hits-Earth-Armageddon thing WITHOUT Liv Tyler and that awful Aerosmith song. In this story, Earth has calculated the time to asteroid impact right down to the minute and the governments (of the entire world?) has done it's homework and decided who gets to stay and be blown up on Earth and who gets to travel on into the cosmos. Apparently the powers that be, have devised an escape plan. Neat eh? I think we've all heard the story about saving the Best & Brightest. Simpsons did it. Treehouse of Horrors X.

What I liked most about the story were the smaller things like the publics reaction to doom. Of course many people decided to jump ship early rather than be blown to bits so there are government sanctioned suicide kits. Then there are people who don't think there's a doomsday at all, and the people who think that the government is lying about saving the best and brightest.

What I was kinda meh about was the artwork. It seemed slightly inconsistent. I'd love one page and the coloring but be less taken with following pages. Artist Chris Peterson was a  Shuster Award nominee and I definitely appreciate his pencilling. For those of you who don't know, that also makes him Canadian. Shuster Awards are for Canadian comic book creators.

I'm surprised to see an asteroid Armageddon story out right now. Remember there were tons in the 90s? All that crazy prophecy stuff that was supposed to happen in like 1996, 1998.. Y2K and then  2012... At least this story hasn't presented some ridiculous belief in ancient prophecy or The Amazing Criswell...

I will read the next issue because this one left one quite the cliff hanger and I want to see where it's going. I want some explanation on this whole bit. Writer Frank J. Barbiere has cut out a good name for himself with the success of titles like Five Ghosts and of course his work for Marvel. I think this will be a good story.
Posted by The Frog Queen at 3:49 AM