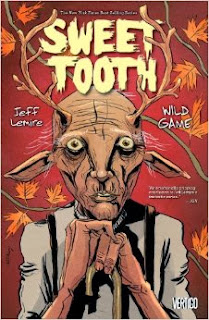 I bought this as soon as it was released but was terribly swamped with homework and the like. Now that school is done for the semester, I get to read all kinds of awesomeness so I read this last night.

Sweet Tooth is one of my favorite series. Although I never got into the singles during it's initial release (mostly due to the fact that I was super impoverished) I use to stare at the covers and flip through the pages. It seemed to be such an odd story. A boy with antlers.

Jeff Lemire wraps everything up in a neat package with the final installment of the series. Although I can't be sure I believe that the hybrids actually caused the plague, I am certain that they were cloned from an earlier living set of animal-humans. Our heroes found the bunker with all the ancient sarcophagi and the cloning tubes. I will accept that as the truth. The final chapter shows us a brief summary of the rest of Gus' life. Complete with family, children, a wife and a community of hybrids. We even get to see where Buddy ends up as well as Gus' death where Lemire represents his passing as he being reunited with "the Big Man". It's very sad as Lemire's stories often are. At least this time, death seems less final and less of a punishment. Instead it's a positive passing and just a part of the cycle of life.