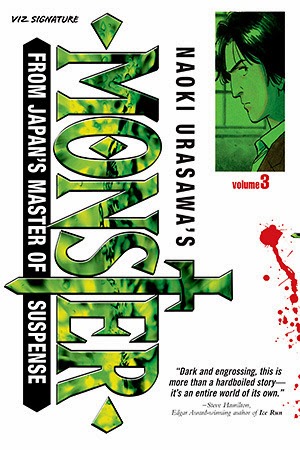 So I've had a chance to dive back into Monster. This time around however, I started to see great parallels between this and Tezuka's famous Black Jack series. Urasawa, an obvious fan of Tezuka's work. Some parallel's being that there is a rogue doctor, a child involved and greedy hospitals and doctors in abundance.

At this point in Monster, Dr. Tennma has become a fugitive suspected of having a spit personality which is a killer. This is not the case, and he remains on the run while trying to hunt down the real killer: a child soldier all grown up name Johann. Tenma has got himself a little travelling buddy now however. A child named Dieter who was almost destined to completed the child soldier training suffered by Johann, our serial killer who's where about's remains unknown and who's existence is still questioned. The book has become a series of events where Tenma is forced to perform surgeries on various patients while being held under duress or other hostile circumstances.

While it is easy to see some inspiration being drawn from Tezuka's famous series, it's not a direct retelling. Tezuka's Black Jack was a collection of un-related stories while Monster does not suffer from "monster of the week serial" syndrome and has an over-all plot focused around one killer. Black Jack was intended to be released as little short stories in magazines so for me, even reading it in volume form was somewhat odd, kinda boring, if not a little challenging. I could read 10 volumes of Monster in a row if I had the time.. and less to read in general. I highly recommend this series already and with book 3, I'm becoming more intrigued by the history of Johann which is beginning to unravel.
Posted by The Frog Queen at 5:21 AM