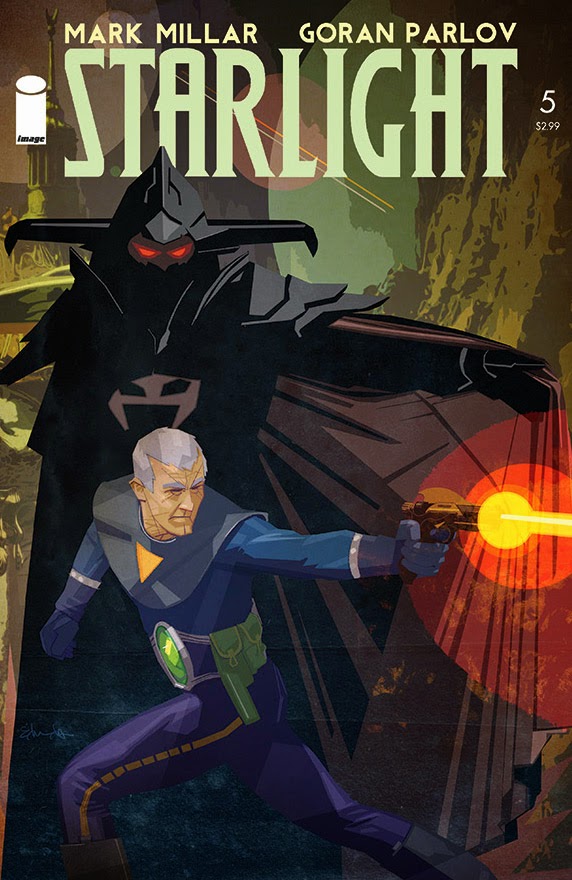 I've been waiting for this! Patiently anticipating and following Goran's facebook posts as he slips panels out. Serious tease. We didn't get a Starlight in July but Mark and Goran made it worth the wait with issue five. I can't spoil it...even though I want to but things are picking up and Duke is full of the confidence he needs to take on the Brotean. He slays some pretty sick mermen too. teehee..

With this issue we have variant covers by Tommy Lee Edwards and Rob Liefeld. I have to say that I'm not a fan of the Liefeld cover. Duke's whole body has been stretched to take up more of the page. Not liking the typical Liefeld jawline either. So you can guess which cover I grabbed! Edwards' cover is 'oh so' lovely and haunting. Normally I'm all about lots of pencil lines but this is just so striking. I really enjoy the sharp edges which make both characters look formidable. Despite a lot of the criticism I've directed at variant covers over the years I actually like variant covers. I enjoy them when they are done by people like Sam Kieth mostly HA! Who would you like to see a Starlight variant cover from ? If he were alive, I think it would be amazing to have something from Frank Frazetta but we all know that's not going to happen. Alive or dead, who would you pick?

I would like to stress how amazing Goran Parlov's work actually is. It's soo fantastic that if he wasn't illustrating Starlight, I probably wouldn't have picked it up. As far as Millar is concerned, he's a good writer but everything he publishes isn't automatically gold. Starlight reuses a lot of classic science fiction stories and plot devices. There's not a lot new there but Goran's work makes this story stand out from other comics. He actually makes this story new and exciting.