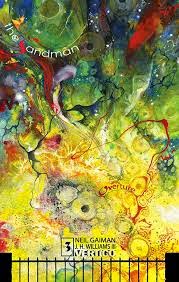 Yeay new character!! It's about time Morpheus had a traveling companion that isn't a piece of his own personality. In this highly anticipated third issue (we waited long enough for it), we get to meet an alien character who ends up traveling with Morpheus and the cat, which is apparently also Morpheus. The first two issues we read had Morpheus flung to the other side of the universe while his soul/brain/personality was splintered into a hundred fragments.

This is one of the few Vertigo titles I've been following as of late. Sadly there hasn't been too many titles from the once prolific label, to draw my attention. That being said, I always attempt to get into whatever hits the shelves. This has to be the most beautiful Sandman to date. Although I've always been partial to The first 4 issues due to Sam Kieth's talents, I have to say that Overture is visually stunning. It fits the whole flung across the universe plot as one would expect to see magnificent spectacles in the unknown. I wish my dreams were so vivid and pretty. I would probably spend my lifetime in sleep. I sort of already do that though. Mostly however, I'm just dreaming about zombies. Having a big cat to ride on the back of would be pretty bad ass though. I could kill a lot of zombies...

What do you think of Morpheus' new companion? I really enjoy that the character is a female and young! More often than not, the people Morpheus interacts with are adults. I think it's an interesting change of pace.