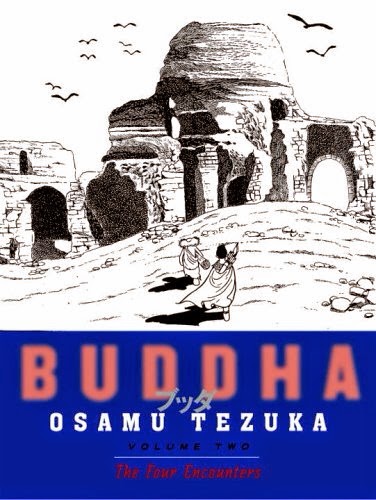 It's become apparent to me that if I want to finish reading this saga, I'm going to have to inquire at my local library. It is now impossible for me to get the paper back editions of this series. I managed to get 1 & 2 a little while back but my constant search online has turned up, SOLD OUT, OUT OF PRINT and then things like "you can have it but you're going to pay over 100 dollars for this paper back" and NO.

I love Osamu Tezuka's work, despite the fact that many of his hokes are not acceptable these days, as they are poking fun at race, size, and sexuality. Many of the his jokes operate on stereotypes. That being said, Tezuka was a very forward thinker for his time. He wrote characters who were different than just the average male hero. Women could be heroes, and characters could be gay. Princess Knight is a shining example of a hero who was born of two genders. A gender bender adventure. I have yet to read Twin Knights which is the sequel to the Princess Knight saga. Again, you have to consider when the book was written. This was considered very progressive, by today's standards probably not so much. For instance, if I thrust the book into the hands of some people I know today and didn't mention where or when it was written, they would probably be very upset by the book.

Buddha is a retelling of Buddha's life from his early beginnings as Prince Siddhartha. Well it starts before he's even born but any-who. Buddha received the Eisner award in 2004 and 2005 for Best US Edition of Foreign Material. The editions which are sort of currently available (if you can find them) are mirrored printings of Tezuka's work and read left to right. Most of the American printings of his work is left to right which kinda makes me sad. I would rather read them as they were intended to be read, right to left.

Don't you hate it when you have an unfinished series on your book shelf?? It bothers me just looking at it. Where am I going to get the rest of this series? UGH.
Posted by The Frog Queen at 6:11 AM