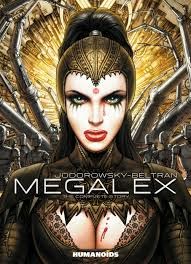 An entire planet's population is controlled by the manipulation of genes. All natural impulses and remnants of nature are suppressed both within the human body and on the face of the planet. The animals and trees forced to the outer edges of civilization. Very little of the natural world remains, except what hides and waits for it's rebirth. A group of rebels join forces with the natural world to take on the Megalex.

A beautiful, hard cover edition of Megalex in it's entirety, is to be released by Humanoids on August 13th. Previously published in three volumes, this will be the first complete edition. Despite how I feel about the artwork, which you will read directly below this, I will be getting my copy of this Jodorowsky masterpiece. I suspect you should as well because you don't know science fiction until you've read Jodorowsky's science fiction.

Let's be frank, I am not a huge fan of the artwork. Beltran had left his brush behind for this project and went full on computer. The first 50 pages especially displease me as far as characters go. However I fell completely in love with the backgrounds. Beltran is famous for largely breasted pin-up girls. All the women despite the very old in the story, are about to topple over because of the weight on their chests. One could try and say that this is a result of genetic breeding. After all, the men seem to be physically endowed with muscles upon creation.... let's just leave it at that shall we?

I really like the plot. Jodorowsky is famous for his science fiction especially within the world of comics. I count myself lucky anytime his work is translated to English. Megalex was originally written for the creator of Akira, or so it says in the lovely Afterword at the back of the book. It was 1993 that Jodorowsky began writing the pieces that became what is now Megalex. The artistry took years to complete with Beltran finishing volume one sometime in 1998, volume two in April of 2002 and roughly six years later he finished the final installment. All this and more detail can be found in the Afterword which is an excellent addition to the book. It really puts the whole saga into perspective. The creation of Megalex itself is a saga and August 13th it can be yours to enjoy.
Posted by The Frog Queen at 6:44 AM